CBD for women is not a new concept. While the cannabis compound may have first been isolated from the hemp plant in the 1940s, preparations of the plant have been used by women around the world for thousands of years.

In ancient Chinese medicine, cannabis was used was to treat deficiencies in yin. While not a familiar concept to many westerners, yin is a term that is loosely associated with earthly, feminine qualities.

The opposite of action and force, yin represents a more passive and deeply rooted connection to the ground, to the bones, and to the feminine lower body.

Regardless of whether or not the concept resonates with you, there are many reasons why the cannabis plant may be particularly appealing for women.

For one, the part of the herb used to make CBD oils and other extracts are most often the budding flowers of female plants.

Fascinatingly, these flowers produce compounds that loosely mimic the activity of estrogen in high doses, estrogen being one of the sex hormones that promote female desire, bone density, and fertility.

However, it’s important to note that neither cannabidiol (CBD) nor the famous psychoactive tetrahydrocannabinol (THC) compete with estrogen when consumed individually.

What’s more, having high estrogen levels, it turns out, may even increase your sensitivity to cannabis compounds.

Yet, if you’re hoping to move away from speculation and into the hard science on hemp oil for women, you may find yourself a little disappointed. 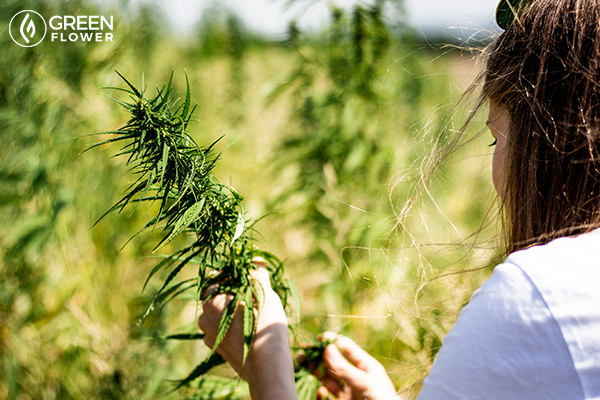 In the world of science, women’s health is often left understudied. Unfortunately, a bias toward male-centered studies still holds true in the budding arena of cannabis research.

While interest in the cannabis plant has grown sharply over the past decade, studies on the ways in which cannabis affects the female body are still a little too scarce for comfort.

For example, many of the articles dedicated to women and cannabis focus on breast cancer and pregnancy.

While these two topics are worthy of attention in every way, few pieces of research have examined the impact of cannabis products for female sexuality and overall sexual health.

In contrast, a number of studies have been conducted on cannabis and testosterone, erectile dysfunction, male sexual health, general penis function, and even anxiety about the sudden disappearance of the penis.

One study in male mice even found that chronic CBD consumption in male mice seemed to reduce sexual desire, decreasing the “number of mounts and ejaculations.”

But, for lady mice? Who knows.

Apart from a 2018 case study citing cannabis-induced spontaneous orgasm, there has been virtually no research on the way the herb impacts the clitoris or other female sex organs.

Further, many of the studies on cannabis for women cater toward the examination of “reproductive function” rather than overall health and satisfaction, sexual or otherwise.

Still, regardless of the lack of scientific investigation into the topic, CBD lubricants and other feminine aids are still marketed to women as pain relievers and overall sexual enhancers.

That isn’t to say that these products don’t work. After all, cannabis has been used as a women’s health tool for centuries.

From easing intense nausea and vomiting experienced during pregnancy to quelling symptoms of menopause, the earliest reported history of hemp preparations for women’s health dates as far back as 2000 B.C.E. in ancient Mesopotamia.

There are also written records of hemp preparations used to ease pain and stimulate contractions in childbearing women in ancient Egypt, as well as in Israel/Palestine.

In Hindu Ayurvedic traditions, the herb was sometimes used as an aphrodisiac and pain-reliever. At least, according to research conducted by Dr. Ethan Russo, a neurologist and medical researcher who has studied the cannabis plant for the last two decades.

While much mystery still shrouds the age-old plant, all of that history must count for something.

Perhaps women who turn to CBD and other cannabis products today are rebirthing some of this ancient wisdom, bringing long-forgotten natural medicines back into daily life. 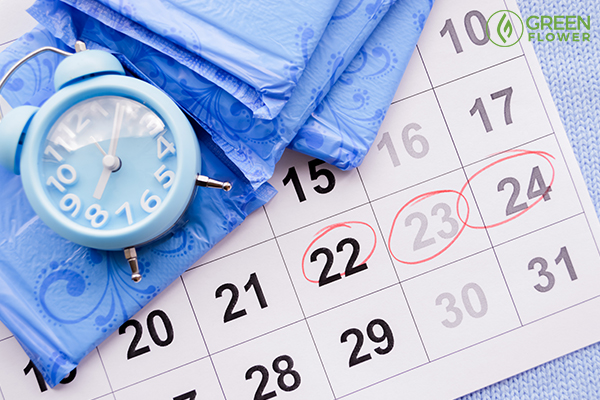 With the CBD buzz in full swing, many women are testing out hemp oil as a way to ease symptoms of menstruation.

A natural pain-reliever, anxiolytic, and anti-inflammatory, the cannabis compound seems to have a lot to offer women during their special time of the month.

Unfortunately, no real research on CBD oil for menstruation exists. However, here’s why so many ladies may be testing out hemp oil suppositories and other cannabis products:

During your period, your body releases pro-inflammatory compounds in tissues in the pelvic region. The more inflammation, the more disruptive your period symptoms.

Pain, bloating, pressure, and general malaise are all caused, at least in part, by inflammation during the menstrual cycle.

While no formal research has been done on the ability of CBD to relieve menstrual symptoms, the compound is proving itself to be a strong anti-inflammatory.

Though new products have not been backed by thorough testing, reducing inflammation is one of the primary goals of many of the new cannabis products hitting the market.

As the inflammation, pressure, and discomfort begin, sudden changes in hormone levels trigger contractions in muscle tissue in the uterus.

These contractions are the culprits behind the dreaded period cramps, adding more fuel to the pain and inflammation that already occurs.

While not specifically tested for instances of vaginal pain, there is evidence that the hemp compound is perhaps the most successful at easing pain related to inflammation.

With this knowledge in mind, some companies are even manufacturing vaginal CBD suppositories to ease these troublesome symptoms during menstruation. 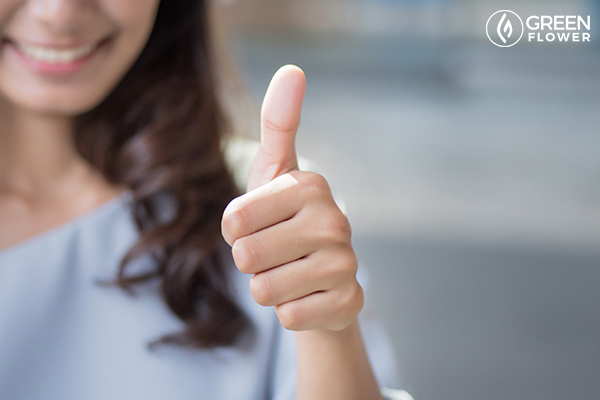 CBD is a natural mood-lifter for many people. In fact, a growing body of experimental and pre-clinical research has found that the cannabis compound boosts serotonin levels and elicits an anti-depressant response faster than some of the most common prescription drugs.

There’s a caveat, however. Much of the research on the anti-anxiety and anti-depressant effects of CBD has been done in rodents.

While rodents can certainly have their bad days, depression in humans may be just a tad more complex.

In humans, however, early proof-of-concept trials have shown that CBD treatments successfully eased symptoms of anxiety and depression in patients with treatment-resistant schizophrenia.

There is a clear link between cannabis compounds and mental health, however, the scope of this link has yet to be fully illuminated by proper research.

Still, when the rag has you feeling down, using cannabis to lighten the mood is an old trick. 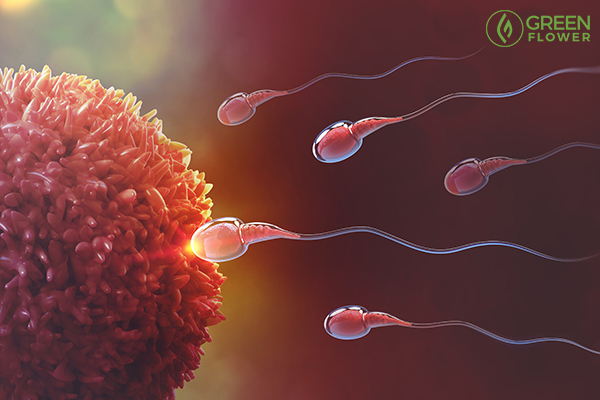 While rumors around the web suggest that CBD may boost fertility, there is a high likelihood that it doesn’t.

Successfully conceiving a child requires a delicate balance of hormones. While it may not always seem like it should be difficult, conception only happens when just the right conditions are met.

A woman is most fertile when sex hormones like estrogen and luteinizing stimulating hormone spike, creating the ideal conditions for the implantation of a fertilized egg.

However, sex hormones like estrogen aren’t the only chemical compounds that influence a woman’s fertility.

The ECS is a vast neurotransmitter network that is activated by many of the compounds in cannabis, including CBD and THC.

In fact, some studies have suggested that anandamide, your body’s natural version of THC, spikes during ovulation.

Levels of the compound continue to decrease during the next phases of the cycle, reaching their lowest point before menstruation.

Yet, an elevation in endocannabinoids during ovulation does not mean that cannabis compounds successfully improve fertility. In fact, early data suggests that compounds like CBD may actually interfere with conception and early pregnancy after ovulation.

While there may be high levels of anandamide during ovulation, elevated levels of cannabinoid compounds at conception have been associated with a failure to conceive after in-vitro fertilization.

This makes sense, considering that after conception, levels of anandamide, estrogen, and progesterone are all low. As pregnancy continues, levels of these compounds continue to rise.

Similarly, low levels of the enzyme used to break down anandamide have also been associated with failure to conceive.

CBD and THC may work differently in the human body, however, CBD still prevents the breakdown of anandamide by de-activating the enzyme used to break down the feel-good molecule.

The non-intoxicating cannabis compound has also been found to enhance levels of anandamide circulating throughout bodily fluids. When you’re hoping to make a baby, heightened amounts of the compound coursing through your blood may not be ideal.

For this reason, if you are struggling to conceive, taking CBD may not make it any easier. Based on the limited data available thus far, avoiding cannabis products during pregnancy and conception is likely your best bet.

Yet, it is also important to mention that many cannabis consumers successfully conceive regardless of their herb-friendly habits.

The truth is a lot of factors can affect fertility, and while early data suggests that cannabis compounds may not be very helpful for those hoping to become more fertile, nothing is concrete and there is still much more to learn about how compounds like CBD interact with fertility and the woman’s body.

Low-Dose Cannabis: The Case For Microdosing

The Mental Health Benefits Of Work During Difficult Times

What Is THC (tetrahydrocannabinol)?

How Long Does CBD Stay In Your System?

Why Medical Cannabis In Greece Is At A Standstill

The Battle For Medical Cannabis In The Philippines