What Are Cannabis Concentrates?

In the past decade, dabbing cannabis concentrates has become all the rage. Refined versions of raw plant material, so-called “dabs” contain more of the active ingredients found within cannabis. From shatter to wax to bubble hash, there’s no shortage of variety in these cannabis products. In terms of the extraction process, there are a number of ways to create concentrates as well, all offering their own unique results.

If you’ve been longing to learn more about cannabis concentrates, the differences between them, and how they’re made, read on for a complete breakdown.

What Is A Cannabis Concentrate?

Cannabis concentrates, more commonly referred to as dabs, are processed versions of the plant that can be made using one of several different extraction methods. The active ingredients in cannabis, known as cannabinoids and terpenes, reside inside the frosty crystals called trichomes on the exterior of the plant. These trichomes are removed from the flower, leaves, and stalks. The resulting substance can then be consumed independently through a special “dab rig” or as an enhancement to a traditional joint or bowl.

Since dabs have a much higher concentration of cannabinoids and terpenes than regular flower, they also have a stronger effect. The old adage of “start low and go slow” should always be observed in relation to consuming any concentrated form of the cannabis plant, especially with elevated THC levels. 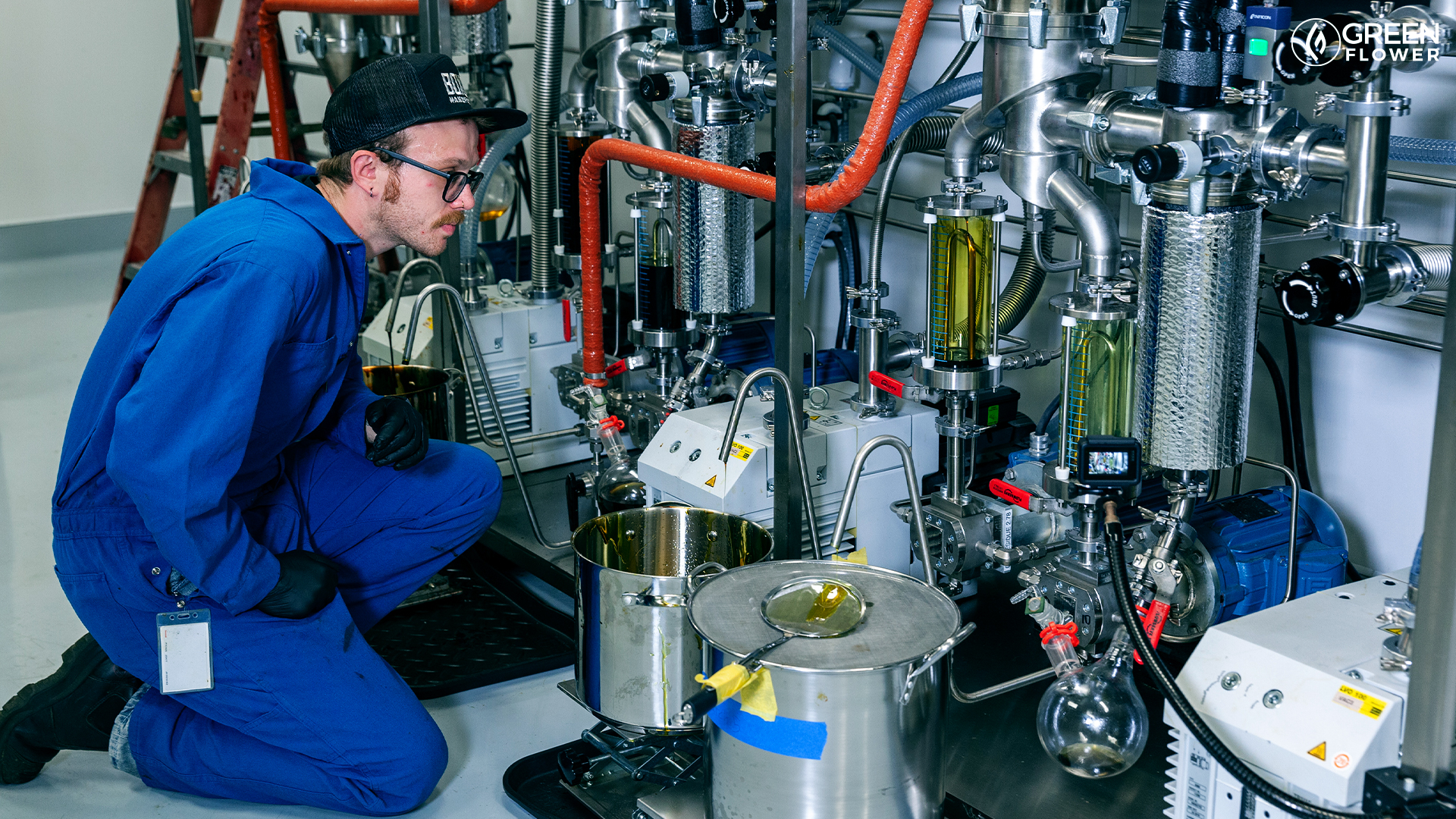 Cannabis Extraction 101 – How Dabs Are Made

Concentrated cannabis is not necessarily a new idea, but there have been impressive developments in the science of extraction as of late. The first cannabis concentrate was hashish — commonly referred to simply as hash — which is still available today in several forms. It was first made by rubbing the plant material to remove the trichomes, which were then pressed together and often cured further to become a dense greenish-brown brick.

Aside from traditional hash, the majority of high-quality cannabis concentrates on the market today fall into one of four categories based on the extraction method used: hydrocarbon, CO2, alcohol, or solventless. Here is a brief rundown on each:

As referred to as butane hash oil (BHO), these types of concentrates are made using butane or propane which passes over plant material to remove trichomes. Residual solvent is then burned off leaving an amber-colored substance with consistencies ranging from waxy to stained glass.

This extraction method is utilized in a broad range of industries. Carbon dioxide is turned into a supercritical fluid somewhere between a gas and a liquid via intense pressurization and is then used as a solvent much like in the hydrocarbon process. Excess CO2 is removed leaving behind a viscous marijuana oil which often is placed into a vape pen.

Another tried and true extraction technology, this process sees raw plant material soaked in alcohol to strip away active ingredients. After a period of time, the plant-alcohol mixture is filtered and purged with the end-product being closer to an oil or tincture.

The term “solventless” refers to a broader category of cannabis concentrates made in entirely natural ways. In addition to traditional hash, products like rosin (made by applying extreme temperature and pressure to the plant), bubble hash (trichomes separated using an ice water bath), or dry sift (separation with a series of screens) all exist under the solventless umbrella. 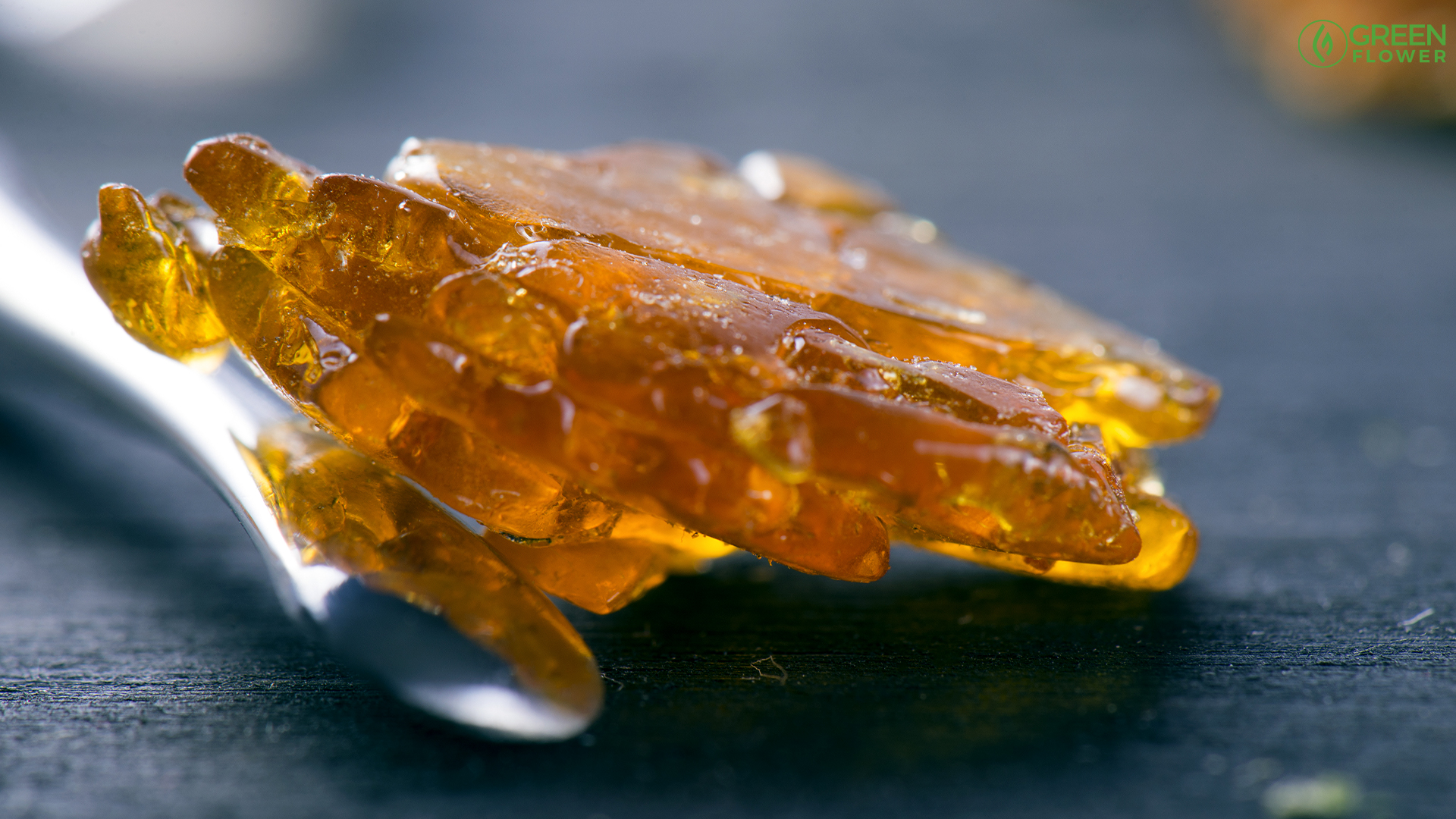 As previously mentioned, there are several varieties of full-spectrum dabs ranging from sap-like syrup to rock, candy-esque crystals. Let’s dive deeper into some of the most popular marijuana concentrate products on the market today.

Thick and sticky, sauce is usually somewhere between an oil and honeycomb in terms of its consistency. It’s typically made through hydrocarbon extraction and has inconsistent crystal content — think of it as dab soup.

Sugar is similar to sauce but tends to have a more defined crystalline structure with less “liquid” surrounding. It can vary in hue but generally has an orange or amber tint. Sugar tends to be a bit easier to work with since it’s easily scoopable for use in a dab rig.

Considered an OG dab form, shatter has a glass-like structure — although it may also appear a bit taffy-like with its often elastic-like quality. It may range from light yellow to light brown and is typically produced in large slabs made through hydrocarbon or supercritical extraction. Shatter is also the precursor to fellow cannabis concentrates batter and crumble (which we explore next).

Resembling soft cookie dough or peanut butter, budder (batter) is smoother and creamier than shatter. It’s made by agitating shatter under low temperatures, thus redistributing air molecules and “whipping” it into a frosting-like form. Somewhere between yellow-orange and tan in color, budder is malleable and easy to spread on joints and dab nails alike.

Another relative of shatter, crumble is drier and more brittle than many of the other cannabis concentrates on this list. Concocted by subjecting budder to low heat in a vacuum-pressurized environment, crumble works well in both dab rigs and joints or bowls thanks to its relatively stable structure.

Also referred to as “rocks” or “wizard stones,” cannabis diamonds may be light yellow or even white, channeling precious gems anyone would say “I do” to. These solid, crystal-like forms are removed from sauce and may be further refined in air-tight jars in a process known as “diamond mining.” Many of the diamonds on the market are THC-A, which converts into traditional THC upon being heated.

Powdery and soft, kief is quite literally nearly all trichome heads which have been separated from the plant using screens. It’s usually a tanish-green color and can be sprinkled on bowls, joints, or in a rig. It’s extremely delicate, so proper caution should be taken to not scorch it.

Bubble hash may be brittle or putty-like, depending on how it is cured. As discussed earlier, it’s made by washing cannabis flower in ice water and then purging it through a series of screens inside bags. Much like its counterpart kief, this compound is typically brown or green in appearance. It gets its name from its tendency to bubble when exposed to heat.

Another solventless weed concentrate, rosin is created by literally squishing the cannabinoids and terpenes out of bud. Professional extractors will use specially-designed devices that use extreme amounts of heat and pressure to get the maximum yield; DIY rosin-makers craft the compound at home using parchment paper placed between a hair straightener to extract the essential oils. Rosin consistency varies but can be sticky like sap or firmer, closer to a badder, depending on the type of press used and the cultivar of cannabis.

Consuming Cannabis Concentrates — What is Dabbing?

Vaporizing cannabis concentrates — aka dabbing — is typically done using a rig made from reinforced glass. A bowl — referred to as a nail — is heated to extremely high temperatures, usually with a butane blow torch. The cannabis concentrate is then placed on the nail and turns almost immediately vapor, which is then inhaled via a mouthpiece. There are also electronic nails available for those who prefer to not deal with a torch or desire greater temperature control, meaning canna-sseurs of all experience levels can enjoy concentrates with ease and precision.

Cannabis concentrates have come a long way since hashish was first conceived a millennia ago. From BHO shatter CBD products to solventless bubble hash, there seems to be new forms of dabs every moon cycle. Whether you take a hot dab in an electronic smart rig or you’re a medical marijuana patient who prefers to spread a little CBD oil on your blunt full of homegrown, one thing is for sure: concentrates are here to stay.

Trusted by top universities, utilized by companies around the world, and endorsed by the leaders shaping the modern cannabis industry, Green Flower programs are the gold standard in cannabis education and training.
START LEARNING NOW
0 comment
0
FacebookTwitterLinkedinReddit
previous post

How To Make Cannabis Tea

The Place In Cannabis: What Is A Landrace Strain?

What Is The Wedding Cake Strain?

Exploring The Future Of Concentrates With Frenchy Cannoli

What Is Rosin? The DIY Concentrate