Home Cannabinoids What Are The Key Compounds In Cannabis?
CannabinoidsEducationTerpenes

What Are The Key Compounds In Cannabis?

The cannabis plant is a unique and complex being. With literally thousands of different cultivars around the world, it’s also incredibly diverse from strain to strain. According to a 2012 study, there are more than 400 distinct chemical compounds present in cannabis and medical marijuana. This includes cannabinoids, terpenes, flavonoids, lipids, and other plant material such as chlorophyll. But how do these components come together — and how do they work in perfect harmony to produce your desired health benefits?

Read on for the Green Flower guide to the key compounds in cannabis.

Tetrahydrocannabinol (THC) — THC is the most plentiful cannabinoid and arguably the most famous. It is responsible for the psychoactive “high” associated with consuming cannabis. In addition to its psychoactivity, this cannabinoid has also been shown to have analgesic and pain-killing properties. The easiest way to deliver THC to the bloodstream would be via smoking or vaping cannabis bud, but a wide range of THC products from concentrates to edibles to tinctures to topicals exist in legal markets.

Tetrahydrocannabinol Acid (THCA) — THCA is the precursor to THC and a slew of other cannabinoids. It is found in raw cannabis and converts to THC when heated, however, it’s far less psychoactive on its own. This cannabinoid has been studied for a variety of uses, including as an anti-inflammatory, neuroprotectant, anti-convulsant, nausea reducer, and anti-proliferative. Tinctures and “diamonds” (a type of concentrate for dabbing) are the most popular THCA products available.

Cannabidiol (CBD) — Another megapopular cannabinoid, CBD is typically sourced from industrial hemp plants. It has exploded in popularity, thanks in part to the passing of the Farm Bill in 2018, which effectively legalized its production and sale in all 50 states. The non-psychoactive compound has been touted for its myriad of potential wellness benefits, including its abilities to ease anxiety, pain, and inflammation. Most notably, CBD has shown great efficacy at reducing seizure activity with the FDA approving the first cannabidiol-based medication, Epidiolex, in 2018 which is used to treat two forms of severe childhood-onset epilepsy. The cannabinoid can be found in virtually any form, from smokable flower to gummies to salves to tinctures to pet treats.

Cannabidiolic Acid (CBDA) — Similar to THCA, CBDA is the precursor to CBD in strains with high amounts of the cannabinoid (mostly hemp). Like its cousin THCA, CBDA transforms to CBD when exposed to heat. It’s thought to contribute to hemp’s anti-inflammatory properties thanks to its ability to inhibit enzymes called COX-2, which the body produces after injury. Research also shows CBDA may help ease nausea and depression. It’s readily available in liquid, topical, and soft gel form.

Cannabigerol (CBG) — CBG has been growing in popularity as of late thanks to its different potential benefits. This non-psychoactive cannabinoid is known as an antibacterial, a blood pressure regulator, an anti-inflammatory, and a sleep aid. While only accounting for about 1% of the average cannabis plant’s cannabinoid makeup, breeders have been honing in on developing strains with higher CBG content. Its precursor, CBGA, is known as the “mother of all cannabinoids,” as it begets THCA, CBDA, and CBCA. CBG comes in flower form as well as tincture.

Cannabinol (CBN) — Another minor cannabinoid gaining steam, CBN is mildly psychoactive and mostly used as a dose-dependent sedative. It is produced via the degradation of THC, tending to turn up in older cannabis. However, outdoor grows will produce plants with higher CBN content as a result of their exposure to natural light. Like many of the other cannabinoids, CBN is also showing efficacy as an anti-inflammatory while also being researched as a treatment for epilepsy, osteoporosis, cancer, bacterial infections, glaucoma, and nausea. It’s available in several forms including vape pens, tea, tinctures, and capsules.

Cannabichromene (CBC) — CBC is the third most prevalent cannabinoid, yet the non-psychoactive compound is still somewhat of a rarity. It comes from the CBDA lineage, giving it anti-inflammatory properties. CBC has also been researched as a potential neuroprotectant, pain reducer, and tumor inhibitor; it has shown promise as a treatment for Crohn’s and irritable bowel syndrome. Currently, CBC is mostly found in topicals, edibles, and oils.

Tetrahydrocannabivarin (THCV) — THCV is extremely close to THC, with only a slight molecular difference. However, this mild variation leads to some major differences. Most notably, THCV is known as an appetite suppressant, the complete opposite of its more psychoactive relative THC. The cannabinoid is additionally touted for its anti-anxiety potential as well as its ability to promote bone growth. THCV is currently available in vape pen form, as well as flower, tinctures, and edibles.

Cannabidivarin (CBDV) — Like THCV, CBDV differs from its cousin CBD ever so slightly in the molecular structure. While little is known about this non-psychoactive cannabinoid, it is being examined as a possible treatment for epilepsy. It has also been known to be effective at reducing nausea and inflammation. It mostly comes in tincture or capsule form. 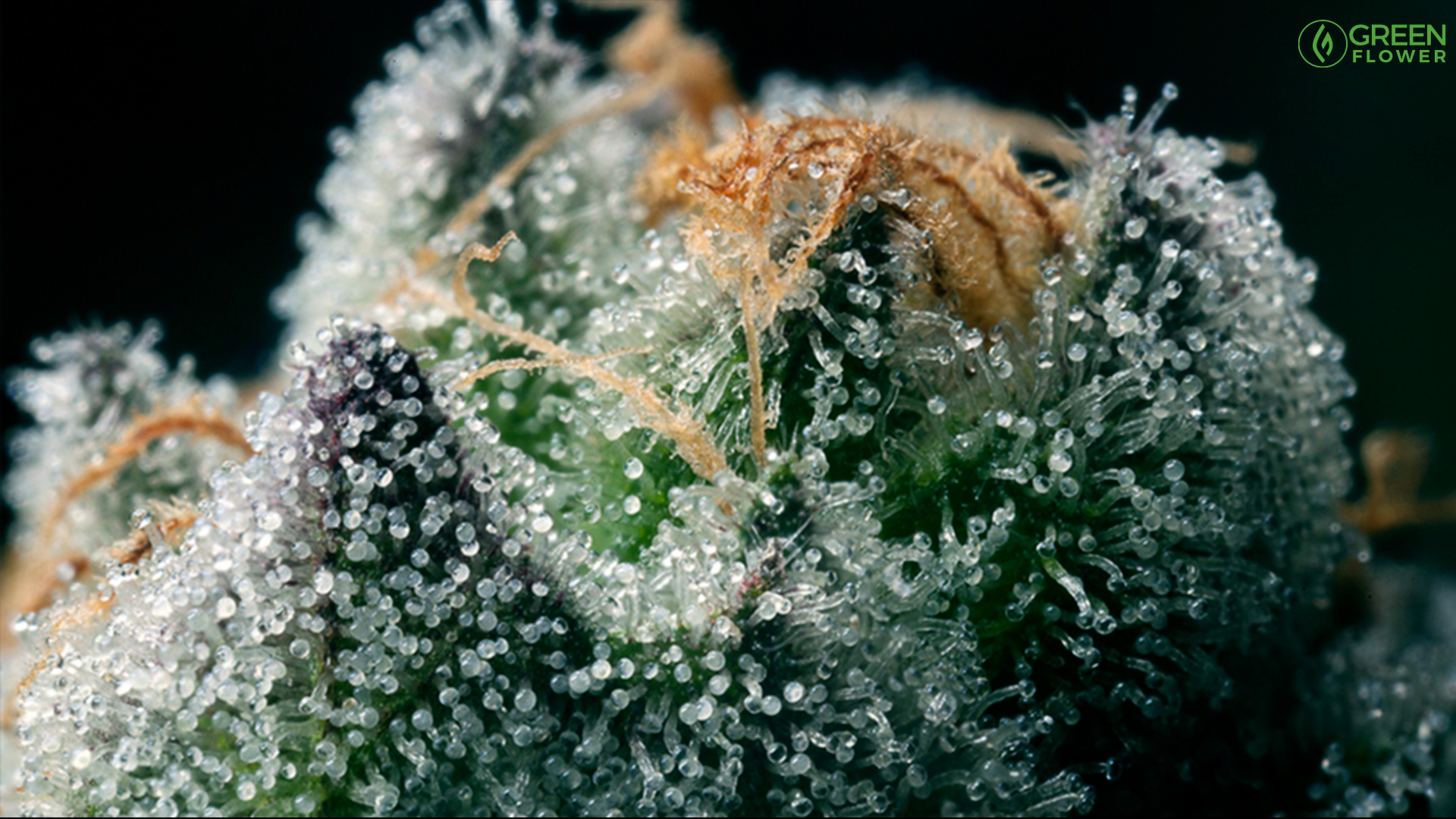 Terpenes — The “Other” Active Ingredients

If cannabinoids are the meat and potatoes of the cannabis plant, terpenes are the special sauce. Terpene profiles are responsible for the aroma and flavor of all plants, including cannabis. Additionally, they are believed to play a role in how a particular cultivar affects you, in a phenomenon known as the “entourage effect.” There are hundreds of these compounds found in nature, but there are eight main terpenes in cannabis plants:

Myrcene — The most prevalent cannabis terpene, earthy myrcene has a calming effect. It is also found in some varieties of mangoes as well as lemongrass. Myrcene is present in several cannabis cultivars but is especially rich in the classic strains Blue Dream and White Widow.

Limonene — Reminiscent of citrus fruits, limonene is known for its stress-relieving abilities. This terpene is found in both sativa and indica-dominant strains, including Miracle Alien Cookies (MAC) and Hindu Kush.

Humulene — Extra dank is the best way to describe this terpene, which is also present in hops. Humulene is believed to have antibacterial and anti-inflammatory properties. It’s abundant in strains such as GSC and Headband.

Terpinolene — Terpinolene is the least common of the main terpenes, but one of the most sought after thanks to its almost psychedelic effects. Also found in tea tree essential oils and nutmeg, this herbal-leaning terpene is found in strains such as Jack Herer and Dutch Treat.

Linalool — Floral and fragrant, linalool is a popular ingredient in aromatherapy. Also present in lavender, this terpene is known for its relaxing effects. Cannabis strains with higher linalool content include Zkittlez and Do-Si-Dos.

Caryophyllene — With notes of spice, stress-relieving caryophyllene is notable for its ability to act as both a terpene and a cannabinoid. It’s present in black pepper as well as cinnamon. Find it in gassy cannabis strains like Chem Dog and Sour Diesel.

Pinene — Featuring a scent that transports you into an evergreen forest, pinene is also found in — you guessed — coniferous trees. It tends to be uplifting while promoting memory retention, present in many sativa-dominant strains. It’s also prevalent in CBD-rich strains, such as Cannatonic and Harlequin.

Ocimene — Ocimene is rarely the top terpene in any given cultivar, but even as a backup singer, this compound could easily be a star. Sweet yet woodsy, ocimene has shown efficacy as an anti-inflammatory as well as a potential treatment for diabetes. It can be found in strains like Amnesia Haze and Green Crack.

Cannabinoids and terpenes aren’t the only cannabis compounds responsible for the plant’s defining characteristics. As mentioned earlier, there are hundreds of unique components. Let’s review a few more:

Flavonoids — Flavanoids are similar to terpenes in that they also play a role in a plant’s odor and taste. However, they go one step further by providing color pigmentation and protection from the elements. A number of cannabis-specific flavonoids have been identified, referred to as cannaflavins, and are thought to play into the so-called entourage effect.

Lipids — A broad term for a variety of non-water-soluble fats and waxes, cannabis lipids are naturally occurring within the plant material. They are heavily concentrated on the outer cell membranes. During the extraction process, lipids are typically removed through a process called winterization. Some cannabis consumers believe lipids, particularly in concentrates, are undesirable due to their tendency to create a harsher hit. On the flip side, having a full-spectrum of cannabis compounds may promote the entourage effect.

Omega Fatty Acids –– Omega fatty acids have long been promoted in health and wellness settings thanks to their heart-healthy attributes. Raw cannabis contains a ratio of 3:1 omega-3 to omega-6 fatty acids, and while you may not get their benefits from smoking, they may come through in products like oils.

Chlorophyll — All plants contain chlorophyll, which is a green pigment used for nutrition during the growth phases. During the drying and curing process, the chlorophyll in cannabis converts to glucose. However, in products like live resin or pressed cannabis oil, the freshly harvested plants still retain a decent amount of this antioxidant compound.

Cannabis is a nuanced and interesting specimen, with hundreds of unique chemical compounds responsible for everything from appearance to effect. While some people only consider the effects of cannabinoids like THC or CBD when shopping at the dispensary, there are literally hundreds of other components that may play a part in what a cannabis strain or product will ultimately do. Doing a little homework to better understand a strain’s makeup will improve the overall experience as it ensures your desired outcomes will be met.

The Place In Cannabis: What Is A Landrace Strain?