Home Edibles How To Make Cannabutter: High Potency
How To

How To Make Cannabutter: High Potency

For medical cannabis patients who deal with a lot of pain, a really strong edible is often the only thing that will provide relief.

A really strong edible often requires cannabutter, and a strong butter at that.

Not all edible recipes call for butter, as some call for raw cannabis, cannabis milk, cannabis coconut butter, etc.

But for the most part, knowing how to make marijuana butter is important as it’s the starting point for most cannabis recipes.

Many different methods exist to make cannabis butter, and there is no “right way.”

Some people out there swear that their way is the only way to make cannabutter, but that’s just simply not accurate.

I have seen people make cannabutter at least a hundred different ways, all of which produced some great butter.

The only real difference was how to make the cannabutter stronger.

Why I Prefer My Cannabutter To Be As Strong As Possible

A lot of cannabutter recipes I have seen over the years produce low to medium-strength butter. That’s fine for a lot of people, but I prefer mine to be very strong.

I have a high tolerance, and when I’m eating edibles, it’s likely because I’m in pain and I want the pain to go away.

Weaker cannabutter is preferred by many people because they just want to relax or eat an edible that takes a bit of the edge off.

What I always point out to people is this:

You can always reduce the potency of butter by substituting some cannabis-infused butter for regular butter in recipes.

However, you can’t add more potency to butter after it’s already been made.

So I prefer to make my pot butter as strong as possible, and then let my friends and family develop a ratio of cannabutter to regular butter that works best for their tolerance level and desires.

Step 1 – What Do You Need To Make Cannabis Butter Stronger?

This is what you will need for a very strong cannabutter recipe that I have been using for about a decade, and have improved upon over the years:

In the past, access to cannabis trim required being a grower or knowing one. Now, however, some dispensaries sell packaged trim or shake at a lower cost than dried flower for use in baked goods.

If you can’t find trim, you can always use dried flower run through a hand grinder. But keep in mind that this recipe requires far fewer buds than trim.

The cookie sheet will be used for decarboxylating the cannabis trim (see step 2), and the potato ricer will be used like a to strain the boiled cannabis at the end of the boiling (see step 4).

Be aware that this method of boiling in a large pot produces a lot of odor.

Many of my friends and family prefer to use a crock-pot or slow cooker to make cannabutter to prevent the smell from filling the house, but I have found that method adversely affects potency.

The method I use involves boiling cannabis, butter, and water for four hours with no lid on the pot, so you can imagine the aroma it produces. Consider this your warning!

Step 2 – How to Decarboxylate Cannabis

For a long time, I did not decarboxylate my cannabis before making weed butter with it.

The end result was still very strong, but the butter did not possess the full effect that it could have had.

Decarboxylation is necessary to activate some of the cannabinoids in cannabis, in order to get the most effect out of the cannabis being used. Below is how you do it:

As with just about anything in the cannabis world, there are differing opinions about the best temperature and duration to decarb cannabis.

Most people I know will say low 200s for about 60-75 minutes, but my friend Amber Senter, who I consider to be the top cannabis edible authority in America, suggested that I do 260 degrees for 45 minutes. 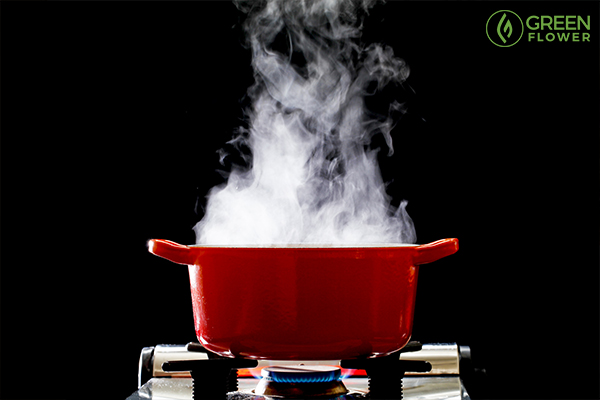 Step 3 – Combine All The Ingredients And Start Boiling

This brings us to the boiling phase, which also includes mixing my initial cannabis butter ratio (strong and easily diluted later with regular butter):

Water protects the butter and cannabis material from scorching.

I cannot emphasize it enough, while the mixture boils it will be putting off a very strong smell of cannabis. If you live somewhere that odor is a concern, keep the overwhelming smell in mind. As previously stated, you can use a crock-pot or slow cooker if you want to lower the smell factor. However, every time you open the lid the smell will be very strong, and since the crock-pot does not burn as hot, the final product isn’t as strong but it will still work.

If you are doing the stovetop method, check the boiling mixture every 15-30 minutes to see if it needs to be mixed and/or have water added.

You can boil it for longer than four hours if desired, but I have found that four hours is sufficient for making a strong cannabutter. 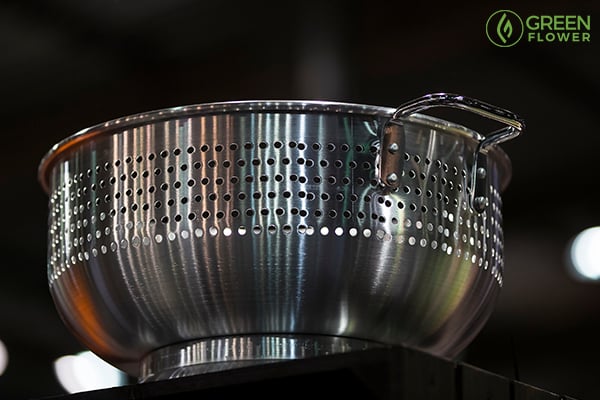 Step 4 – Straining The Mixture After The Boiling Is Done

When you are done boiling, the next step is separating the solids from the liquids.

A lot of the work can be done by pouring the mixture through a fine-mesh strainer into a container. However, the remaining ultra-hot cannabis trim still has a lot of liquid butter on it, and that needs to be separated, too.

For a long time, I placed the remaining plant material on the strainer and let gravity do the work. However, not all of the butter would strain off of the cannabis, and a lot would be lost or missing front he final product.

I then started just squeezing the cannabis with my hands (after cleaning them of course!), which was very effective at getting the remaining liquid butter off the cannabis.

It was a long process, as I had to wait for the cannabis to be cold enough to touch, but still warm enough for the butter to be in a liquid state — so warmer than room temperature.

One day, my wife saw what I was doing and asked why I wasn’t using a potato ricer. I had never heard of such a thing, but it proved to be a revolution for my butter making process.

I have been using a potato ricer ever since, which has really cut down on a lot of the time spent straining and squeezing the cannabis. 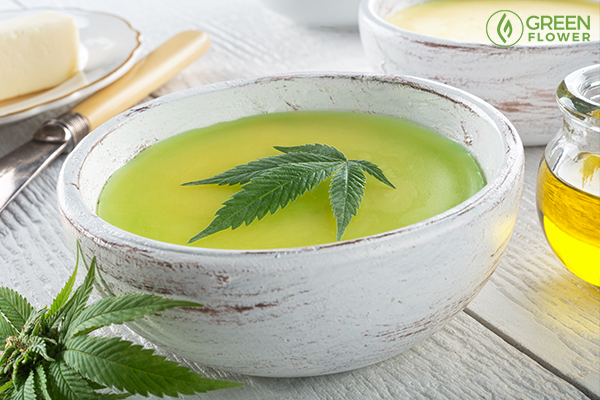 Step 5 – Letting The Butter Cool And Storing In The Refrigerator

By the time you are done straining and squeezing the mixture, the cannabis liquid will have already started separating, with the water on the bottom and the oil on the top.

Leave the container out for about 30-45 minutes to cool off a bit, then put it in the fridge overnight.

When you wake up the next day, the oil will have hardened into gloriously potent cannabutter.

Pulling it out of the container is tricky, as the water underneath will splash around as you’re removing the butter, so watch out for that.

You can discard the water, which is likely brown and very gross looking. Scrape off any funky stuff from the bottom side of the cannabutter chunk, and put it in the fridge.

This recipe should make extra-strength cannabis butter, which can be mixed with regular butter to reduce the potency if you need a lower edibles dose. If you don’t reduce the potency, be careful, as this recipe makes really, really strong cannabutter!

If you are trying to be healthier, you can, by all means, use unsalted butter as an input too.

If you have any tips, tricks, or another butter recipe that you prefer, by all means, put it in the comments section so that others can benefit from your knowledge!

Trusted by top universities, utilized by companies around the world, and endorsed by the leaders shaping the modern cannabis industry, Green Flower courses are the gold standard in cannabis education and training.
Start Learning Now
8 comments
10
FacebookTwitterLinkedinReddit
previous post

Cannabis Overdose: What Happens If You Consume Too Much?

How To Judge Flower Like A True Cannabis Connoisseur

How To Grow Bigger Buds Outdoors

How To Make Canna Oil For Edibles

How To Make Cannabis Tinctures

What Is RSO (Rick Simpson Oil)?

How To Prune Your Cannabis Plants

How To Become A Budtender

Hello. Is there a reason the butter will not harden completely even in the frig?

Has it been in the fridge for more than 24 hours?

Don’t forget to add water! Burnt cannabis butter tastes terrible and has no potency -been there, done that.

Love your process, but unless I missed it, I don’t see any measurements for the marijuana or butter ratios.

I’ve used a quarter of flower per stick of butter using this recipe & the high was great.

I second the no measurements thing! I want to try but I’m not sure how much of anything i really use?

I agree with Jonathan, measurements would be helpful. I’ve used the method you describe myself and abandoned it for the oven method, just for efficiency’s sake (no water to deal with), noticing no appreciable difference in strength. I’m wondering what makes your method produce stronger butter and unless it’s the ratios (which you don’t specify), I can’t see it. I’m perfectly happy with the strength of my butter, but my friends all want it stronger. As you say, I can always dilute with standard butter or oil, but starting with stronger butter makes everyone happy.

The higher the saturated fat content, the more potent the result. Try coconut oil instead of butter.